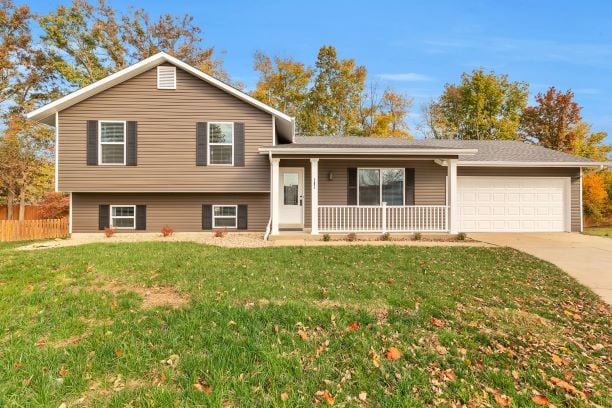 A quick view of the most influential metrics in St. Peters.

St. Peters is a larger city in St. Charles County, Missouri not far from the sprawling city of St. Louis. St. Peters has earned a ranking among the top 100 places to live list from Money Magazine in 2008, 2010 and 2012. It has approximately sixteen neighborhoods and is the tenth largest community in the state. St. Charles is known for its wonderful park system and award-winning recreation and fitness center. It is a wealthy community compared to state and federal economic statistics and has mixed workforce. It is a well-educated community were over 35% of adults, over the age of twenty-five, hold four-year degrees or more. It is a diverse community in terms of race and ethnicity. The majority of residents identify themselves as Caucasian or African-American. Common ancestries among residents include Irish, English, Italian and French. English is the primary language, but many residents also speak Spanish or Vietnamese.

The first known inhabitants of the area were indigenous Missippian mound builders. The first European settlers to the area were Spanish and arrived in the late 1700s. However, the community we know today as St. Peters was founded by French fur traders. The community is named in honor of a Jesuit Mission that was established in the early history of the area. In the 1830s through about 1850, German immigrates helped the community grow into a thriving farming community. The community was incorporated as a town in 1910 and officially became a city in 1959. Today, it is a thriving community with a warm and welcoming atmosphere.

Three school districts serve the city of St. Peters, Fort Zumwalt School District, Francis Howell School District and St. Charles School District , which all three provide wonderful educational opportunities and services. There are also a number of excellent private schools like All Saints Catholic School, Child of God Lutheran School, Campbell Montessori School and others. St. Peters is known for its beautiful and extensive park system, which is the largest in St. Charles County. the system spans over 1000 acres of parks and trails and offers amenities like playgrounds, recreation trails, picnic areas, athletic fields and courts and so much more. Local attractions include an award winning Rec-Plex recreation and fitness center, veteran’s memorials and an 18-hole golf course. Homes for sale in St. Peters range from first-time buyer homes up through sprawling luxury properties. Other real estate options include rental properties such as houses and apartments and townhomes, condominiums and more for lease. To begin your home search in beautiful St. Peters, call local real estate agent Kaitlyn Barks at 314-650-5370 today.

View our selection of available properties in the St. Peters area.

Check out the latest demographic information available for St. Peters.

Learn more about schools near St. Peters complete with ratings and contact information.

The Best in St. Peters

Browse through the top rated businesses in the most popular categories St. Peters has to offer.

Spacious townhome in the St. Peters area listed and leased by the Barks Realty Group!  This home fe… read more

Listed at $1,450 per month, this fantastic ranch home in St. Peters is available for rent!  With 4… read more

2 bedroom / 3 bath condo in the St. Peters area listed and leased by the Barks Realty Group for full… read more